Free Shipping on all orders thru May 31st, 2022
Details

Overnight delivery is available within the continental USA. All orders received on a Friday, Saturday, or Sunday will be processed on the following Monday for Tuesday delivery. If Monday is a national holiday, orders will be processed the following day. Delivery delays can occasionally occur. Terms are subject to change at any time.

One of the largest and most advanced manufacturers in Waterbury may come as a surprise to many. Meet ERIC PEDERSEN – the Ivy Leaguer turned financier dare-to-dreamer who may just revolutionize the future of fish consumption.

“Beautiful, aren’t they?,” the man says, proudly holding two from his latest harvest. He is an imposing figure – a full six-foot-four, deep-timbered voice, thick features, with a barrel chest covered by a black pullover. He’s also a gentle giant – like a whale shark, on land, wearing blue booties.

The man is Eric Pedersen – the Chief Executive Officer and founder of Ideal Fish, an aquaculture company that raises branzino.

It’s Wednesday morning on Waterbury’s Avenue of Industry, inside a sophisticated complex that science fans would fawn over, a few hundred yards from the major highway that can quickly transport the delicious Mediterranean fish to a market or kitchen anywhere on the Eastern seaboard.

Ideal Fish is one of the country’s most innovative businesses – they’ve been featured everywhere from trade publications to public television to The New York Times – and another shining example of Waterbury’s alive-and-well legacy in specialized manufacturing. Only rather than brass parts, chemistries or plating solutions, Pedersen’s Waterbury company happens to “manufacture” sea creatures.

At the thought of his operation being seen as a “fish farm,” however, Pedersen bristles.

He genuinely appreciates the fish – so much so that he refers to them as employees – and jokes that, by sheer numbers of fish, his company is the largest employer in Waterbury.

Despite growing up in the Baltimore area (His father was an avid fisherman who didn’t care what he caught, only that what was caught was eaten), and residing in Fairfield County, Connecticut, Pedersen loves Waterbury – and never tires of telling others about his Rockwellian commute to the city.

“I drive from Stamford, Connecticut, to Waterbury almost every day. It’s honestly one of the most enjoyable parts of the day, when you head up Route 8 through the Beacon Falls area. You see these rolling hills and panoramic view of Waterbury nestled in this little valley, with the clock tower of Siena poking up out of one side. It’s a really thrilling drive.”

But, it’s not one he planned on making.

Pedersen bumped into the Waterbury commercial property market by happenstance, and once he did, Eric was enthralled. “I realized that there were many buildings appropriate for the type of operation that I’m running. And, there was an administration in this city that is very pro-business, very pro-entrepreneurship, and very pro-taking risks… to help people like me who were trying to skin the cat a little bit differently, and get on their feet with the kind of support that it takes to do something this disruptive. I look back on finding this building as a turning point.”

Pedersen says that after discussing the Ideal Fish business model with Mayor Neil O’Leary – “He, in his very enthusiastic way, quickly understood what I was trying to do” – Eric received a cryptic request from the Mayor to attend a meeting the following week.

Pedersen walked into a conference room at City Hall, to find a large table lined with people sitting upright, notepads in front of them, pens in hand. The people were administrators for water treatment, building, zoning, health and other key City functions.

After Eric gave a 15-minute overview of the Ideal Fish concept, the Mayor stood up.

“You’ve heard from Eric,” O’Leary began, “And you’re about to hear from me. Here’s what we’re going to do. We’re going to get Eric and his business established in Waterbury as quickly as we can. Any questions?”

Pedersen knew then that he had found the right people – people who have also connected him to resources at the state level. “[Our system] is a new technology. Even the DEEP here in Connecticut has not had to regulate a company like ours before. I’ve gotten support and groundbreaking innovation from a regulatory standpoint to help make this business possible. And it all started with the snowball that began rolling here in Waterbury.”

Pedersen has a rhythm to his thoughts – concise yet informative, measured yet immediate – even on heavy philosophical questions. When asked to describe how he views the overlap of business and life, Eric answers in mental stride:

“I think it was the leader of a Scottish Himalayan expedition who said – and I’m quoting loosely here – ‘Whatever it is you want to do, whatever you dream that you want to do, go do it… because there is power and energy in innovation.’ And at some point, all the attributes of providence conspire to assist you, and open doors, and give you access to resources that you would never have dreamed possible.”

If Pedersen seems especially eloquent, it’s because he’s one sharp cat. Eric studied Architectural History at Princeton, and got his Master’s in Finance from the Wharton School of Business at the University of Pennsylvania. You’d never know either, because – as unassuming as he is – he’s not likely to tell you.

On the surface, Eric’s career path couldn’t be more incongruous to creating an aquaculture operation – Director of Business Development for a company in Philadelphia, head of a private fund in New York City, CEO of a Texas-based holding company, and another based in Colorado.

However, the companies were GE Water, The Water Fund, STW Resources and The Water Company, respectively – so Pedersen recognizes how what he’s doing today is an amalgamation of his previous interests, a now-obvious trajectory that led him to founding Ideal Fish in 2013.

He hopes Ideal Fish will disrupt how consumers view fish consumption, but it was originally just a huge disruption within his own home – and of his own making.

An involved and loving dad, Eric thought that creating a reef tank would teach his children about fish, nature, life, death – and how complex systems can organize to support life.

Pedersen says: “As I should have predicted, the kids had very little interest in any of this. Even the fish were of marginal interest, but I became quite interested!”

Increasingly, Eric found himself waking up at odd hours of the morning – cleaning the tank, doing water changes, or just observing the fish – before his trek to Wall Street. He also did the very thing that most husbands know better not to do – going all in on a “major purchase,” without consent from the misses.

The creation was met with “a considerable amount of skepticism” by his wife, physician Patricia Calayag. Skepticism about his multi-tank setup turned into skepticism about his sanity, when the family’s kitchen utensils – and Patricia’s prized salad bowl – went missing. (They all became part of Eric’s fish waste management system.)

As time went on, the family got used to the basement arrangement – even ending their dinner parties with the most unique man cave ever seen.

“[My wife] would lead the group of hapless guests into the basement to show off her crazy husband’s Rube Goldberg, DIY aquaculture system,” laughs Eric heartily. 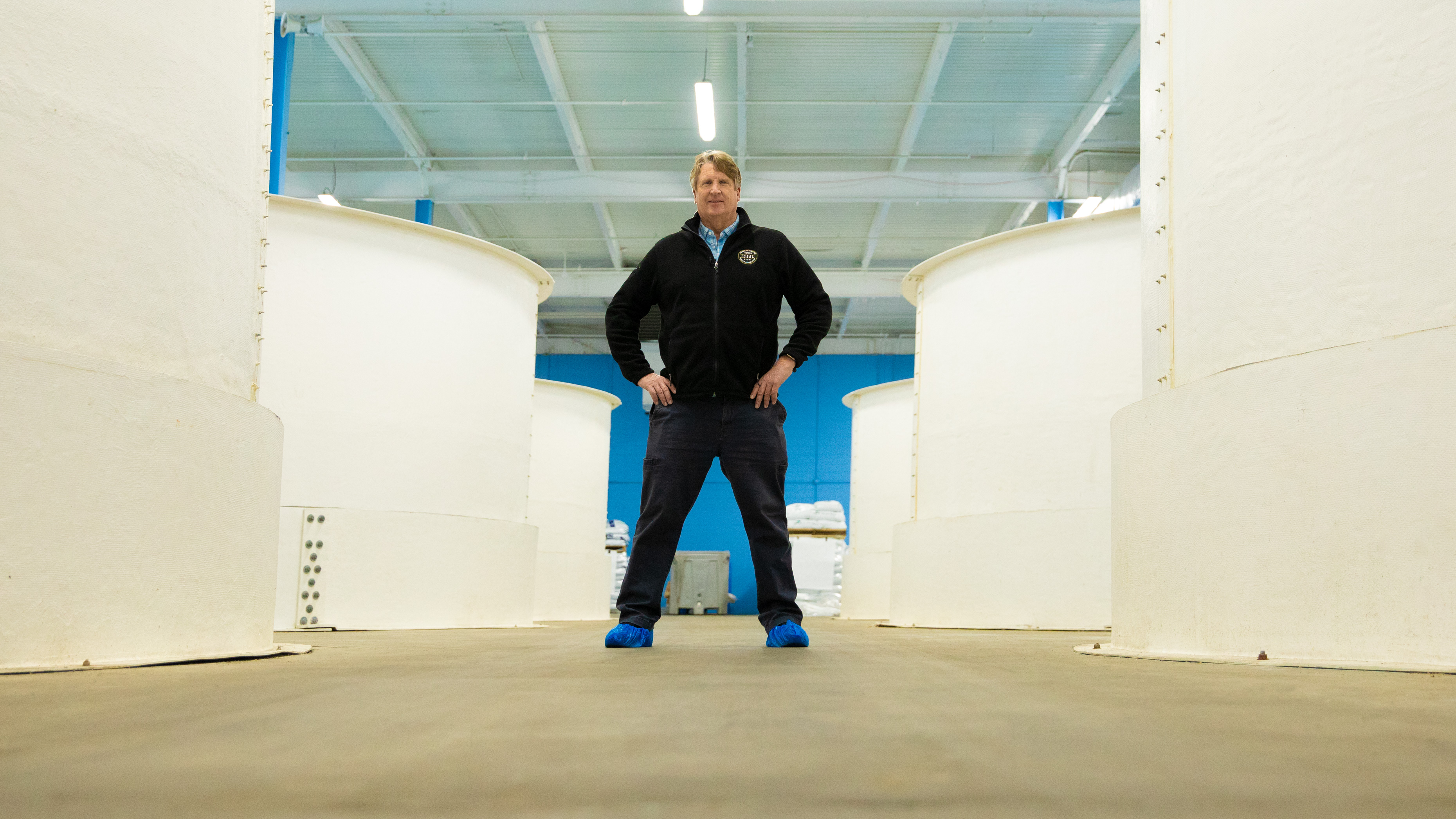 The Ideal Fish facility is equal parts immaculate and sophisticated. It also holds the distinction of Largest Saltwater Fish Facility in the United States. Originally built by the Waterbury Button Company, it is now one massive “closed loop” aquaculture system – meaning, the waste products of one system become the nutrient inputs for another, so nothing goes to waste.

Inside this indoor ocean, every detail of the process has been considered. The abundant water supply is reused so that only “a trickle” ever leaves the facility, and the fish refuse is sold to local farmers as an earth-friendly alternative to petrochemical fertilizers. QR codes are even attached to each fish, so the end customer can learn exactly where their meal came from, and how it was cared for.

Basins of disinfecting solution greet you at each door to sanitize the afore-mentioned blue booties. Controls monitor all aspects of the environments – water temperature, pH levels, water quality, you name it – and an in-house laboratory is stocked with full-time personnel. One of the lab heads came to Ideal Fish after her aunt heard the Mayor talking on a local radio program about “this exciting new fish facility” in Waterbury.

When asked what makes his company special, Pedersen once again replies rhythmically:

It’s the people – and to a person, my staff are all located right here in the Waterbury area. and it is what’s made us successful. That’s something that you can’t look at in the papers, or online, and figure out. You have to go out… and see what the labor force here is like. And what you have is, an ethic in this community that is resoundingly American.

Eric expounds on his patriotic perspective of Waterbury:

“It’s all about working hard, working fairly, working honestly, and doing it in a way that gives as opposed to takes. And everything that I’ve encountered – from the support of the administration and the municipal organization here to the staff that comes to work every day – has been consistent in that regard.”

Pedersen has very ambitious plans to expand in the Waterbury area, in order to grow additional fish species. “Waterbury really allows us to do that because there’s a lot of… what I would call, robust industrial infrastructure in this city, to support an expansion plan.”

He even believes that Waterbury is becoming an example for how industrial cities can reset themselves, and regain their leadership positions.

“We’re already seeing hydroponic vegetable growers. We’re seeing food processing hubs, which is a major project that the Mayor pushed through. And in time, [Ideal Fish] will likely branch into some form of hydroponics as well. So I think the city has a fantastic future ahead of it – a tremendous promise, because it already has the things that are needed to build a successful business and expand to critical mass quickly.”

As excited as he is about Ideal Fish, Pedersen is most intrigued by the impact businesses like his can have on solving global issues.

Recirculating aquaculture environments, he says, can be placed in any urban area or market. In other words, fish can be produced and provided to people locally in ways that weren’t possible before, and that greatly reduce negative environmental impacts.

“We can address environmental and sustainability issues on which the health and well-being of our planet depend. If we don’t figure out more sustainable ways of feeding human populations, and if we don’t find better ways of managing our water resources, we’re going to be – as a civilization – heading down a very dangerous path.”

Eric’s remarks conjure up a philosophy similar to one of his heroes, Dietrich Bonhoeffer – a Lutheran pastor, theologian and anti-Nazi dissident who said, “The ultimate test of a moral society is the kind of world that it leaves to its children.”

Pedersen envisions leaving a world where farmed fish are recognized as the gold standard, and Ideal Fish is seen as a shining example of superlative best practices.

“It’s the fascinating part about what we do. It’s that intersection of life and nature and technology… all in Waterbury.”

Free shipping on all orders $100 or more in the continental USA Hungry to add more?